Whale oil history as an incentive to destroy the world. 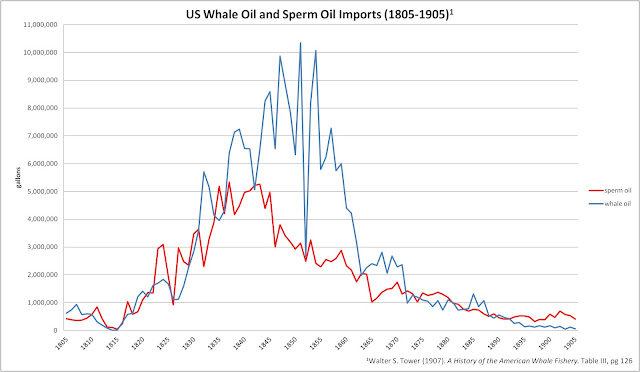 As far as I know, whale oil was primarily used in house lamps, and alcohol, starting in the 1830s was a significantly cheaper fuel source.  $0.50/gallon vs $1.30+/gallon for whale oil.  https://en.wikipedia.org/wiki/Timeline_of_alcohol_fuel
image is from Wikipedia article on whale oil, and Walter S. Tower, 1907 book.

The mystery then, is why would whale oil imports surge 1000% over the next 20 years?

Economic strategies available to dominant but declining industries
Those in declining industries will see reason to worry, and likely foretell, the eventual decline.  If burning fossil fuel will destroy the planet, but make you money in the process, then you will tend to value the making you money part than whatever that first part said.

If you see competitive alternatives to your energy source that are cheaper and cleaner, and you know they will eventually displace your energy product, then you:
From axiom 1, kill all the whales was an ensured outcome.  Prior to alcohol competition, sustainable whaling made whaling easy and more profitable by restricting supply.  Overproducing became necessary to make it easier for consumers to choose murdered whale byproduct for their lighting needs.

Axiom 2 and 3 could explain the eventual 1860 $2/gallon tax on alcohol.  A theory would be that politicians after being lobbied for 30 years on shutting down alcohol would be eventually pursuaded even if all of the benefits of alcohol destruction went to the new fossil oil industry.

I'd appreciate any Historian's input as to specifics in how the 3 axioms influenced the peak whale oil transition.

Analogies to our current energy tipping point
Renewables are competitive purely on energy price, and with climate and pollution costs, obviously preferable.  The assured reaction by dominant incumbents though is rapid desperate overproduction, and the need for political allies at any cost to preserve incumbents positions.

A history of whale oil and how the industry managed to increase production so much in the face of better competition is a very important illumination to the corruption alternatives that the planet destroying energy incumbents have and will use to preserve their lifestyles.

A not so illuminating whaling history,  though a point I ignored in comparing whale oil to alcohol is the potential differences in energy content.  A gallon of gasoline for instance has more energy capacity than a gallon of alcohol, and so a gallon of whale oil could have burned brighter or longer than a gallon of alcohol. Estimates are that whale oil has the same energy density as kerosene, and less than 30% higher than ethanol. Though energy density does not mean a bright flame.  It appears as though camphene (alcohol mixed with turpentine) was  brighter than kerosene.

this reddit discussion has additional info on the uses of whale oil and relative lighting properties of alternatives.  Specific support for marketing awareness of pushing whale oil as the "civilized" lighting alternative

“Great noise is made by many of the newspapers and thousands of the traders in the country about lard oil, chemical oil, camphene oil, and a half-dozen other luminous humbugs,” The Nantucket Inquirer snorted derisively in 1843. It went on: “But let not our envious and — in view of the lard oil mania — we had well nigh said, hog-gish opponents, indulge themselves in any such dreams.”


The Whalemen's Shipping List, a journal devoted to the whaling industry, was particularly notable in pushing the anti-camphene agenda. In one issue, it claimed:


"We have often thought that the State, which recently seems to take such care of what we shall eat, and what we shall drink, ought to interfere in this matter. We have statutes for the storage of gun-powder. It is put away, out of the reach of hap and hazard. Yet every day we hear of this house burned, of that child killed, by the explosion of what is called 'camphene.' It seems to us that the State might find some ground for its legislation, even here."


These types of "You wouldn't want your children to use lead-enriched Chinese toothpaste, would you" appeals are a strong implication of desperation and marketing push.  Despite any claimed superiority of whale oil, the industry would have needed to ramp up production considerably to keep the price premium over camphene "reasonably small".

To me, the truth appears closer to the whalers tried killing all the whales as a response to alcohol fuel competition.  Kerosene did gain quick dominance in lighting applications around 1860, but in the US, this was due to taxes on alcohol, though it also likely had convenience advantages as well, including a lack of denigration history by the whaling industry.

Shocked... Shocked! that Exxon would know about destructive climate effects of its production
Recent revelations show Exxon knew about CO2's effect on climate change as early as 1981, despite contributing to creating social and political doubt for these effects.  I actually don't blame them for such a position.  Rather our entire political systems are broken and corrupt for being susceptible to their influence for this long.

If someone told you that a $100 bill you own may be counterfeit, your first reaction would not be to throw it in the trash.  Human nature would compel you to look for facts that suggest it is not counterfeit.  The entire value of Exxon's property is tied up in the premise that it contains oil and that oil is beneficial.  Their opinion that oil is beneficial is certain regardless of truth behind the claims, and therefore the opinion is worthless.  The only problem is entirely within a political system that can side with such opinions.

A carbon tax and dividend scheme (revenue from carbon tax is redistributed equally to all citizens) is absolutely necessary to curb destructive climate effects of fossil fuel use.  It is especially appropriate now that renewable power has achieved cost parity with high CO2 and pollution producing fuels.  I suggest enough taxes to create a $4000 per person (US consumption) dividend.

The effect of a carbon tax is that individual people can:
A tax and dividend plan is automatically progressive as the rich are more likely to use more energy than the poor.  Heating 10000 square feet costs more than 800 square feet.  It gives every individual the option of making no change, and so only provides more choice to everyone.

A carbon tax and dividend plan can also be a component in a greater UBI program.  $4000 of UBI coming from a carbon tax greatly reduces the funding requirments from other sources, and more easily allows a UBI threshold that is sufficient to eliminate all other social assistance programs while permitting a self-development budget (education but not limited to institutionalization) for every citizen.
Posted by Pascal J. at 11:50 AM